In Martin Luther’s little work, A Brief Instruction on What to Look for and Expect in the Gospels, he makes the intriguing assertion that we should press into the Old Testament to find Christ. Luther says, “[i]t is there that people like us should read and study, drill ourselves, and see what Christ is, for what purpose he has been given, how he was promised, and how all Scripture tends toward him.” So, let us turn to the book of the prophet Zechariah to learn more about Christ. As we turn to this part of Scripture, which is full of visions and apocalyptic imagery, what we see at first glance is horrifying. However, we need to go back a chapter to pick up on what the prophet Zechariah has been saying to God’s people.

The thirteenth chapter of Zechariah prophesies a time for Judah and Jerusalem to be cleansed from sin. At this time — “on that day” is the term used repeatedly by Zechariah — idols are removed from God’s people. False gods, false prophets and the spirit of uncleanness are swept away like dust to be remembered no more, gone, done, vanished. The false prophets will confess their lies; even their parents will do away with them. Then, God whittles down His people by two thirds, and those who remain He purifies through flame. Yet it is this small band which God claims for His own. Just as poignantly, though, they claim God as their own! This is the point at which we come to chapter 14 of Zechariah’s prophecy.

We read that Jerusalem is besieged with devastating results. The Holy City is utterly defeated and ransacked. The raiders feel so secure in their victory over Jerusalem that they sit down and divvy up their stolen prizes — right in the middle of the city, for all the losers to see. “The spoil taken from you will be divided in your midst,” the Lord says (Zechariah 14:1). Thankfully, God does not remain idle. On that day, God’s feet stand on the Mount of Olives. His presence changes the very topography of the land, so that God’s people seek shelter where His feet touch the earth (v. 4). On this unique day, God causes light to shine in the weak hours of twilight (v. 7). Living waters pour forth from Jerusalem to the east and west and flow continually, even in the dry summer heat of the Middle East (v. 8).

Then, the prophet declares, God becomes ruler over all nations (v. 9). Jerusalem is glorified as she is raised above all other cities around her (v. 10). Her security is guaranteed by the Lord; so that all who stand against the city will be struck with a wasting disease (vv. 11 12). On that day, the nations are so disoriented that they fight one another instead of Jerusalem. Subsequently, God’s people gather up the wealth of all the nations (vv. 13 14). This is an undoing of the earlier ransacking Jerusalem suffered.

The final result is that all of the nations who are left come and worship the Lord by keeping the Feast of Booths (v. 16). The Feast of Booths was the festival of the final yearly harvest. Israel was to offer up sacrifices of thanks and praise for the fruitfulness of the land. The festival’s name comes from God’s command that His people come up to Jerusalem and live in simple dwellings, to remember how God provided for Israel’s needs in the wilderness and give thanks for all He has done. You can find more on this in Leviticus 23. On that day in Jerusalem, Zechariah continues, all that was once considered common is sanctified by God. All pots for meat will be “Holy to the Lord,” so that the sacrifices once meant only for priests to eat are shared by everyone (v. 21), showing the complete sanctification of all people in Jerusalem and Judah.

There are several connections between Zechariah’s prophecy and Matthew’s account: going back to the previous chapter in Matthew’s account (chapter 23), we see Jesus rebuking the Scribes and Pharisees — teachers of God’s Law — for their hypocrisy. Some of His harshest rhetoric can be found in this chapter: “they preach, but do not practice” (v. 3); “You blind guides,” Jesus says (v. 16); “white washed tombs” (v. 27) He calls them; “First clean the inside of the cup, then the outside,” (v. 26). Christ is rebuking their spirit of uncleanness. He cries over Jerusalem, for it is within her walls that the words of God are twisted. Within the Holy City herself God’s prophets are stoned and killed. Destruction is coming upon her, Jesus says (Matthew 23:37 39).

Then, we come to the first verse from our reading in Matthew (chapter 24). Christ’s disciples are calling His attention to the beauty of the temple. Yet, Christ proclaims that it will be thrown down to the last brick
(vv. 1 2). He goes on to describe the utter chaos which will come: earthquakes, famines and wars between nations. There will be false messiahs yelling for attention, beckoning all to hear their words, while the disciples of God’s Son are threatened and hated (vv. 4 9). All of this, Jesus says while sitting on the Mount of Olives (v. 3). Yet, Christ continues, the Good News will be preached throughout the world as a testimony to all nations (v. 14). In other words, the Gospel will flow out from Jerusalem to the east, to the west, and all over the globe, before the end comes.

There are many similarities we can see in these two texts. However, there are also key differences. The biggest difference can be seen in the endings of each reading. Zechariah ends with God being worshipped by all nations. It ends with God being proclaimed King over all peoples. It ends with a feast, the Feast of Booths. Our reading in Matthew ends with the testimony of Christ reaching to all peoples on the earth. Most significantly, perhaps, the temple in Jerusalem is seen in the ending verses of Zechariah. Israel was commanded to go up to Jerusalem for the Feast of Booths (Deuteronomy 16:16). In our second reading the temple is destroyed.

At this point, many Christians may have portions of the New Testament bubbling up in the back of their minds. Jesus said He would destroy the temple and rebuild it in three days, although He was talking about Himself, His body and His resurrection (John 2:18 21). We see also in Revelation 21 that there is no temple in the New Jerusalem, “for its temple is the Lord God the Almighty and the Lamb” (Revelation 21:22).

Yes, the temple is in both readings, the temple in Zechariah, the one where the nations come and give thanks and sacrifices to God is Christ. Jesus of Nazareth is the place where we meet with God — the place where heaven and earth meet and dwell together. Jesus, the crucified One, is where we come to offer up ourselves as living sacrifices. We offer prayers of supplication and intercession — with thanksgiving — in the Name above all other names: Christ — risen and glorified!

There is one other place in the last chapter of Zechariah where we see Christ — right at the start of the chapter. In the first verse we see Jerusalem, the Holy City, despoiled, defeated, and destitute. Jesus ended His earthly ministry in the same way: despoiled, defeated, destitute. He was despoiled, not only of glory, but of simple brotherly kindness. He was robbed, having His clothes stripped from Him, defeated in His court case, and left destitute — hanging upon a cross without even a sip of water to comfort Him. Before Jesus’ very eyes soldiers gambled for His clothing, they divided up their spoil in His midst.

It is in the suffering of the human race — in the suffering of His people — where Christ shares our weakness. Exactly at this point, Jesus becomes the place where God and humans can finally be together for all eternity. So, it is through this suffering that Christ defeats His enemies and snuffs out all the powers which would separate God from His beloved creatures. The waters that flow out from Jerusalem can symbolize many things, but certainly they are the waters of Baptism. And in these waters God drowns His enemies and raises up the same people as His sons and daughters. Children who will spread the testimony of Christ to all the world.

So, we have completed our task. We have located Christ in Zechariah’s prophecy. And since we know where Christ is, we can also locate ourselves in the reading as well. For we are with Christ since we have been made members of His Body (Ephesians 5:30). We find ourselves as the converted worshippers coming to the Temple — Christ himself — to offer thanks and praise in remembrance of what God has done for us. We also find ourselves among the citizens of Jerusalem, now able to partake of the Holy Sacrifice of Christ’s Body and Blood, given to us in bread and wine.

And we find ourselves with Christ in His suffering and humiliation. Just as Christ allowed Himself to be defeated, we daily bring our old rebellious selves — who still oppose God as King — to death, to utter destruction, in the waters of our Baptism. Through daily repentance, our new selves live humbly before the One whose name is above all names and worship God — Father, Son, and Holy Spirit — as the One True God, taking His testimony to the ends of the earth and wherever God may lead us. Amen. 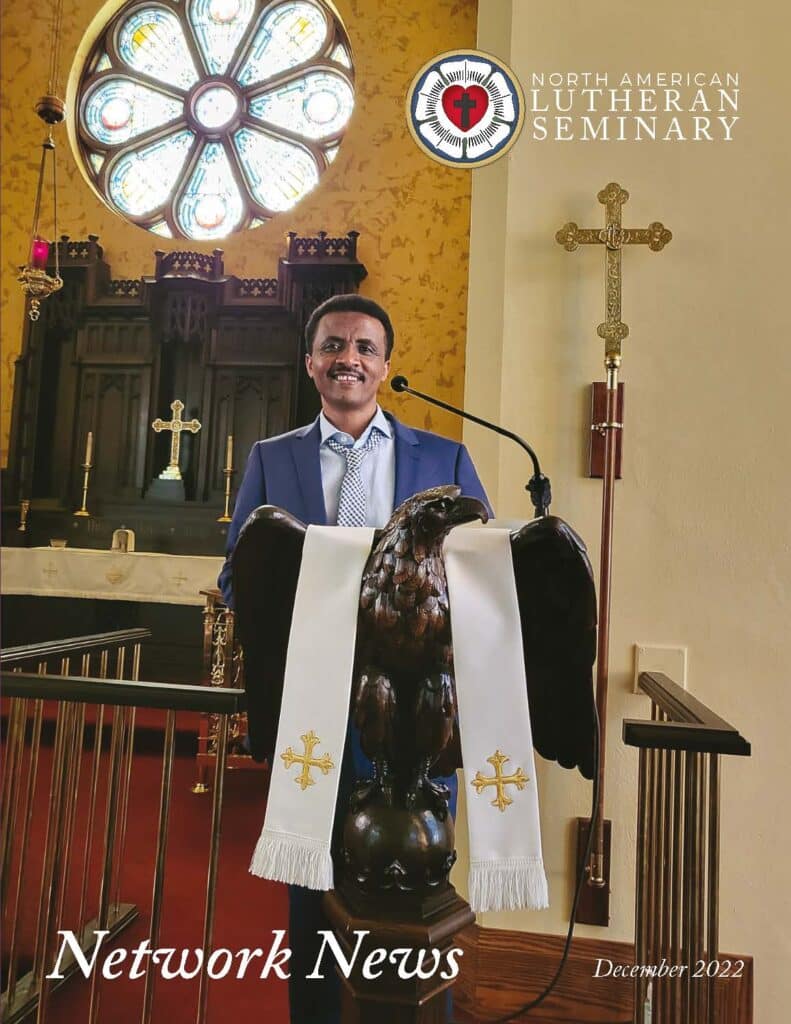